Ever since Human Head announced Deathloop, the gaming community has been rather curious. Finally, an Arkane Lyon shooter with both AAA production values and storytelling skills? Sign me up! But will it run on my system? Or will I be stuck in that everlasting timeloop due to insufficient hardware?

Game optimization doesn’t take into account only the singleplayer component. I’m not here to judge anyone for playing Deathloop multiplayer. There are different reasons to prefer multiplayer over singleplayer games. Some of us play games online to get a kick out of defeating other human beings, some are looking for friends to have fun with while playing games together, and so on. Either way, having sufficient horsepower is key if you want to get the best experience for this shooter. But don’t fret! Just like I did before, I’ve done some research – I’ve taken a look at the minimum requirements, recommended specs, real-world benchmarks, and various other sources that should give you all the info you need to pick a suitable laptop for Deathloop.

Requirements for a Deathloop laptop

Deathloop is a GPU-intensive game, meaning that the graphics card will make or break your experience. The difference between high-end and low-end cards can be the difference between buttery smooth framerates and choppy gameplay. To keep things simple, I’ll give you 3 recommendations for GPUs for Deathloop – bare minimum, recommend, and best.

I’ve included this section in the article for readers who are still in the process of choosing their laptop. If you have already made your choice, feel free to skip this section.

If you are looking for an integrated graphics solution, don’t expect it to get anywhere close to smoothly running Deathloop. Integrated graphics chips hover around 10-25 FPS on the lowest settings. If I had to use industry terms, I’d say that’s “unplayable“. In short, we’ll need to go for dedicated graphics.

The first GPU that can hold its own is GTX 1660 Ti. It’s no great shakes as a graphics card, but it manages to reach 35 FPS on medium settings on Full HD. AMD Radeon RX 5600M comes with a slightly better showing and manages to fit into the same price bracket. Nice. If we want to go further, we’ll need to spend a little bit more.

If I were a doctor and you were in dire need of a GPU to play Deathloop, I’d prescribe you RTX 3060 or RTX 2060 (if money permits). It’s easy to see why these two cards come out on top of all the other options – they’re the only cards that support 4K resolutions without having any notable performance sacrifices across all settings levels at 144Hz refresh rate panels (anything below 60 FPS becomes unplayable). These cards are currently unbeatable when it comes to raw performance for this game at their respective price points – so there’s not much more than needs saying here!

Let’s step into the bee’s knees of gaming, the heavyweights of graphics, and the top dogs of video cards. I’m talking about RTX 2080, RTX 3070, and RTX 3080. In particular, I find RTX 3070 to be the best option as the more expensive cards do not bring much more to the table.

Major How to choose the right processor for Deathloop?

What do you need to improve your FPS? A high-end processor, of course. What type of CPU? Well, that depends on what you want to play. If you’re playing Deathloop, then the CPU type will be Intel Core i7 or AMD Ryzen 5 – in other words, 10-series Intel processors or 7th generation AMD processors.

Intel Core i7-10810U @ 1.10GHz is the minimum requirement for Deathloop; it’s the only CPU that’s good enough for this game right now. However, if you’re looking for a better framerate, go with an AMD Ryzen 5 4600H (this is the one I recommend).

Alternatively, if you’re looking for an even higher framerate, go with an Intel Core i9-10980HK @ 2.40GHz – this is what I recommend if you want to hit impressive framerate.

Now it’s time to give you some specific recommendations – which laptop should you buy? To begin with, you’ll need one of the following CPUs:

Deathloop is a 3D, multiplayer-only shooter with a deep story and a vast variety of missions. It’s also known for being a resource hog, so it’s vital to have the right specs.

Choosing the best laptop RAM for playing Deathloop is not something you need to worry about too much – it doesn’t matter that much. While your CPU and GPU are more important, your RAM still has an impact on performance. But unlike processors and graphics cards, the options are not as diverse, so choosing the right amount of memory size should be pretty straightforward. The question is – how much?

I’m usually not one to recommend anything but the best, but I’ll make an exception here – 12GB should do just fine if you don’t expect to multitask with Deathloop. That means there are no other applications running at the same time, no web browser open in the background, no music player streaming on your laptop speakers while gaming, etc. Just Deathloop alone. So if that sounds like your use case – then 12GB will be enough for you.

For those of you who don’t play just Deathloop, and instead want to run some other apps in the background – I’d recommend getting 16GB. That’s still enough for a lot of multitasking, but you’ll need to limit your RAM usage when playing the game itself. It might seem like an odd trade-off, but it’s worth it if you’re looking for something that is future-proof.

Finally, if you want to be future-proof without any limits on your usage – then go for 32GB. As always, it’s more expensive than anything else on this list, but it’s worth it if you have the budget for it. Plus, you’ll be glad when the future hits and things get even more demanding.

Optional requirements for a Deathloop laptop

Optional How to choose the right storage for playing Deathloop?

Hey, let’s talk about storage for playing Deathloop. I know you probably don’t care about it – it’s okay, it’s not your fault. You were never taught about it in school. So today, I’ll be your professor of Laptop Storage Studies (and yes, I have a diploma to back it up).

I won’t blast you with another comparison of SSD vs. HDD – it’s as clear as day that SSDs are a superior choice. Sure, they are a lot more expensive, but that’s even that price difference has shrunk over the years. That’s why we’ll stick to laptops with SSDs, and we’ll fallback to HDDs only as a crutch to protect wallets in our lowest budget recommendations.

SSDs are thankfully not as impactful on gaming as they would be on some professional applications. That’s why we don’t need to scrutinize every SSD metric with a few notable exceptions. Needless to say, laptops with NVMe PCI-e SSDs are preferred over models that use SATA connection. On top of that, some rudimentary read/write benchmark checks are in order. But that’s pretty much it.

But what if I’m not sure how much space I need? TL;DR:

There are a few parameters that go into picking the best laptop for Deathloop. A good starting point is the display’s resolution. Full HD is sufficient, but if you want to have a gorgeous experience, I recommend going with QHD or 4K. This doesn’t have any effect on gameplay, so it’s a matter of preference. But for competitive games – a high refresh rate display will do wonders.

The second parameter is adaptive sync. It’s great for gamers who need the utmost performance, but not required for Deathloop. The third parameter is panel type and image quality. This depends on your preferences and budget – TN is cheaper and more common, IPS provides better contrast and viewing angles, and OLED has an expensive premium but also excellent contrast and viewing angles. 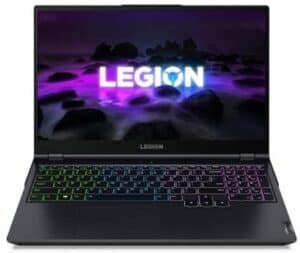 Table of Best Laptops for Deathloop